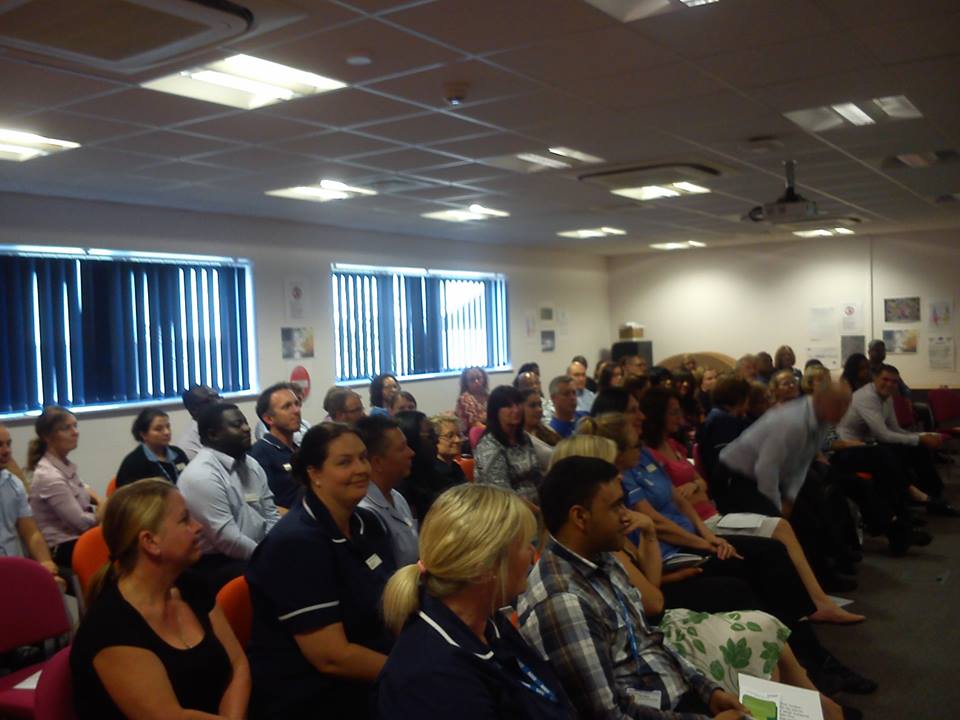 Berrywood Hospital is in Northamptonshire Healthcare NHS Foundation Trust. We have known about Berrywood for some time as ward manager of the Marina PICU on the site, Rowena Rogers and Head of Hospitals Andres Patino have been e-mailing to get a visit. Then, as is sometimes the way with the world, our good friend Paul Lumsden took up a post as their interim director of nursing (or some such) and we organised, not only a visit, but a whole morning showcase.
And bloody hell- it was BRILLIANT. No kidding. For one, the chief executive, Angela Hillery came and stayed and was all for it, for a second, the walls were covered with their own safewards posters, for a third Rowena and Charge Nurse Wendy Neeson brought their “Calm Down Box” – but there’s more!
After I’d done my usual spiel and they had politely applauded, ward manager of the 17 bedded male ward, Toni Gent got up and just did a fantastic presentation on how she and her staff were implementing Safewards. The ward is called Cove ward (her first slide called it “re-COVE-ry” ward – see how clever they are.).
Toni is amazing – clever, compassionate, courageous, caring – and really happy to give her staff loads of praise. Afterwards I noticed a card that the staff and patients had given her for her brilliant leadership. I did grab her for a video and hope she will be ok about me posting it later. But I should also say that she was humble, decent and just a bloody good ward manager (like Sian Williams and Nyreen Nangle in many ways).
So Berrywood could be described as “implementing safewards” but I would see it more as taking the safewards ball, running with it, painting it a different colour, having fun and then giving it back in a better state then they found it.
To cap the day off the passionate Lindsay Bennetty, who is there PMVA lead, took me to the training suite to show me how they have incorporated Talk Down and other Safewards bits into the training.
Came away humbled people, I can tell you. Went to tell them how to do it, but it turns out they showed me.
Brilliant Berrywood, just bloody brilliant!!!! Took more photos than I can post!
The only bad thing was I didn’t get to meet Andres – so I think they should invite me back